Last evening, my husband and I were lucky enough to hear a talk from Norman Ackroyd at the Pallant House Gallery, Chichester.  We are both great admirers of his work, but even if we had not been, we would have marvelled at this octogenarian so full of energy and enthusiasm for the wild and wonderful places he visits each year to study and draw, using watercolour and sugar lift printing in situ.

Born in Leeds in 1938, the son of a butcher, Ackroyd went to Leeds College of Art before enrolling at the London College of Art in 1961.  He was elected Royal Academician in 1988 and Senior Fellow in 2000.  A CBE was awarded in 2007 for Services to Engraving and printing.

Rather than talk about his work or methodology, Norman took us on a guided tour of many of his favourite places, depicting them with examples of his work.  He spoke, not about his own incredible achievements – see www.normanackroyd.com – but about those others who had influenced and impressed him – the Poet Douglas Dunn and the writer    F H White to name but two.  He was such an engaging, intelligent and warm man – we felt we could have listened to him all evening.  With tales of climbing, jumping, sailing, zooming around in helicopters, he is a superhero in so many ways!  His passion for his chosen scenic places, the birds, the history of place were all very evident.  You can view Norman talking about his work on You Tube by following this link.

If you, by chance, are not already aware of his work, here a couple of my favourites:

END_OF_DOCUMENT_TOKEN_TO_BE_REPLACED

One of the most common finds while I walk along local beaches is rope and twine.  Often this is knotted and in varying degrees of perfection – I have a whole bag of them now. 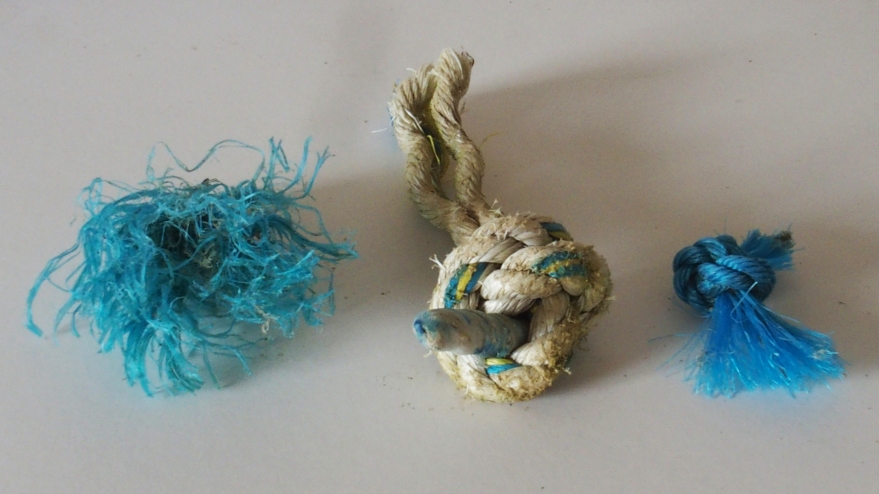 I decided to start experimenting using knots with some of my found pieces.  I had the idea of using found times which had holes in them and knotting through or around the holes.  I knew that this would be a laborious, repetitive business but was interested to see how this slow repetition would affect my thoughts as I worked.  I had read that undertakings boring tasks allowed the mind to wander and become more creative:  Read more about this here – Harvard Business Review – two studies found a strong link between boredom and creativity. In short, people who were subjected to monotonous, repetitive, or otherwise uninspiring tasks then asked to think creatively or brainstorm ideas far outperformed those who were not subjected to the drudgery.

When our minds are bored, they seek inspiration. The studies’ authors “suggest that boredom boosts creativity because of how people prefer to alleviate it. Boredom, they suggest, motivates people to approach new and rewarding activities. In other words, an idle mind will seek a toy.”

And so, I started my first project without any end goal, just to see what would happen.  I worked with a rectangle of found metal, calico and found twine from the beach. 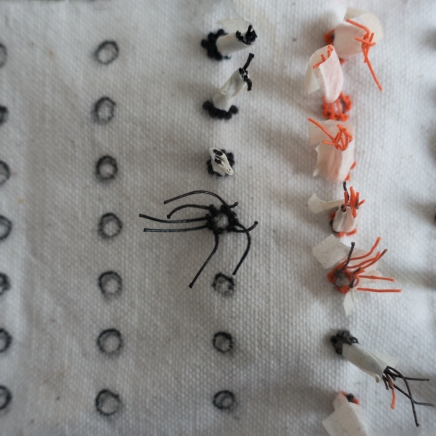 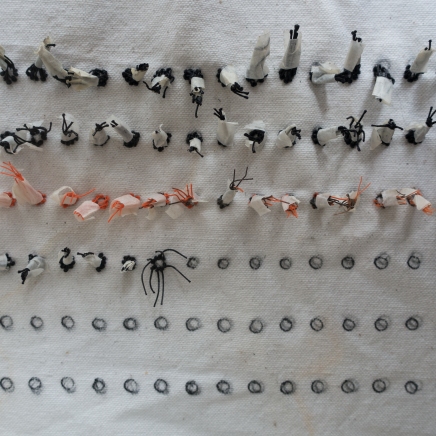 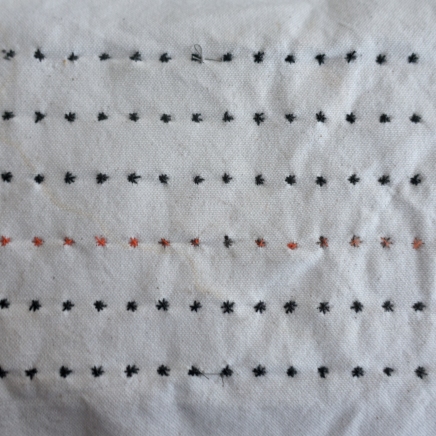 I am never this neat on the reverse! 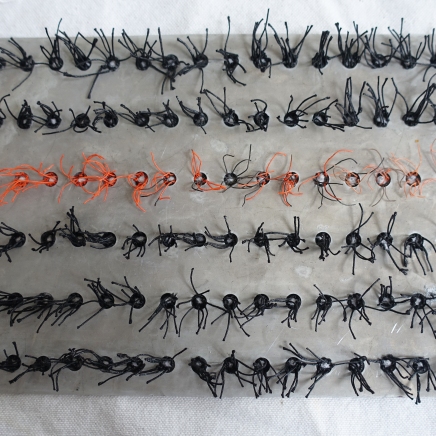 Next, I decided to try bristles from a found brush in combination with a piece of found metal mesh.  The mesh was delicate and, by the end, had started to break up.  Like the first task, this took me several days.  I am still working on how to present it. 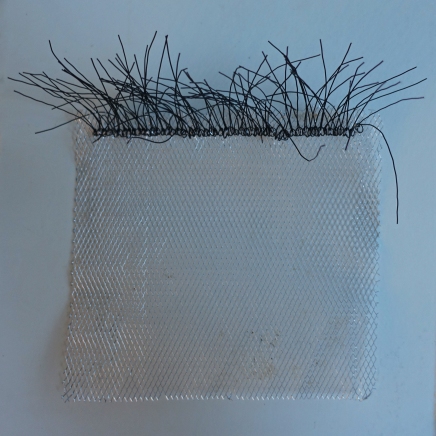 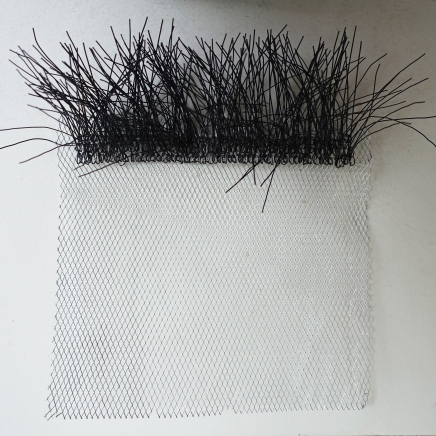 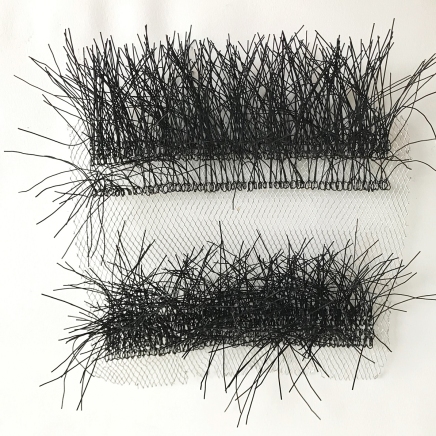 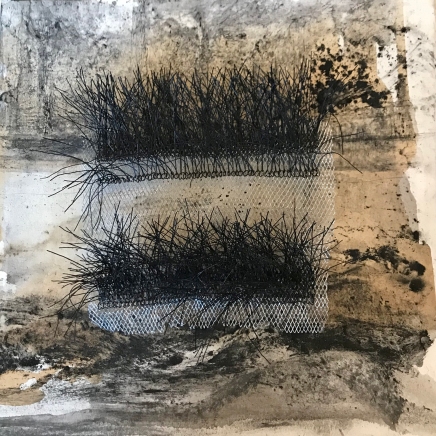 The next project is a little bit “out there”!  I recently found a tea strainer and decided to see what developed if I started to knot through the mesh of this.  It is very hard work and I am having to use a magnifying lamp to see the holes. 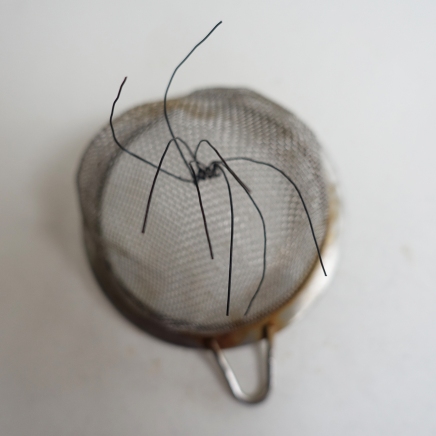 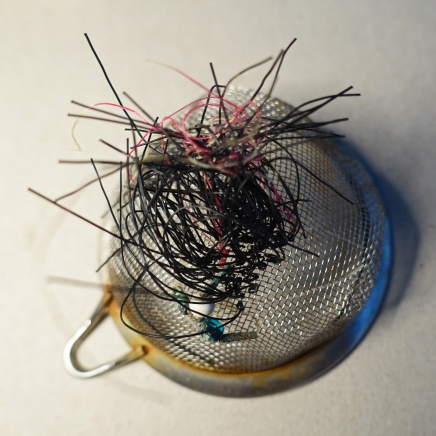 This one may not be a keeper – we will have to see.

What has been interesting, thought, is to see how my mind wandered during the long hours of knotting.  I started to think about the people in times gone by who spent their days making fishing nets.  This seemed to strike a chord and link back to the beach where I had found my objects – a research project beckons ….